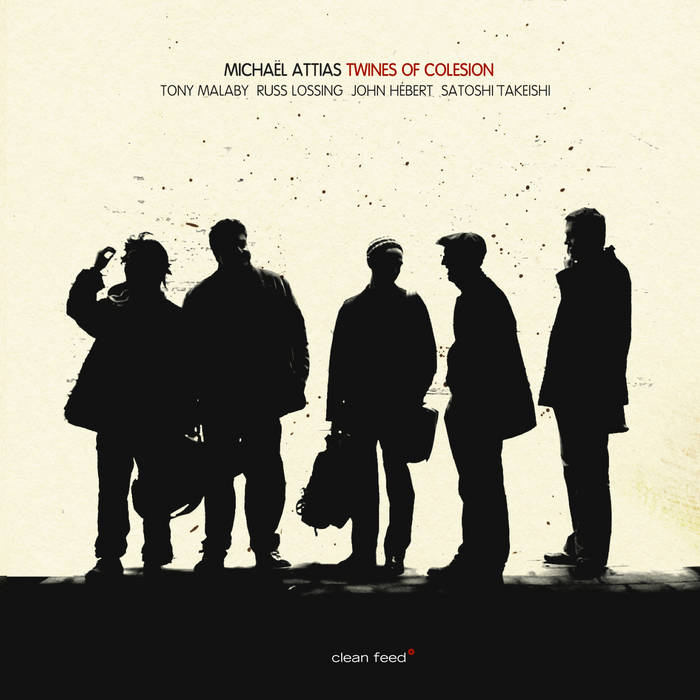 Clean Feed, CF188
Building on the core trio of Renku, Twines of Colesion gathers the entwined trajectories and prismatic contributions of these powerful and original creative musicians (Michaël Attias, Tony Malaby, Russ Lossing, John Hébert and Satoshi Takeishi) in a collective exploration of mutable form and combustible narrative.  Recorded live, the performances of the eight compositions on this album were picked from a series of three concerts played in Coimbra, Portugal during the same residency at the Jazz ao Centro festival that produced Attias’ recent trio release Renku in Coimbra (Clean Feed). Notated sections flow in and out of spontaneously generated sub-groups, forms dissolve and reappear in ever renewed shapes and time-feels, transitions between the pieces become pieces in themselves. In a remarkable example of highly democratic 21st century jazz, each performance is an unique and unrepeatable journey through the written material and each player an agent of power and change in directing the dream-flow. Twines of Colesion sings the song of a very special and risky sort of molecular paradise. Don’t miss it.

Recorded live at Salão Brasil as part of the "Jazz ao Centro" Festival in Coimbra (Portugal) by João Ferraz on June 5, 6, and 7, 2008. Mixed by João Ferraz at Quinta da Música Studios in Porto. Mastered by Luis Delgado. Photos by Richard Gartrell. Artwork by Travassos.