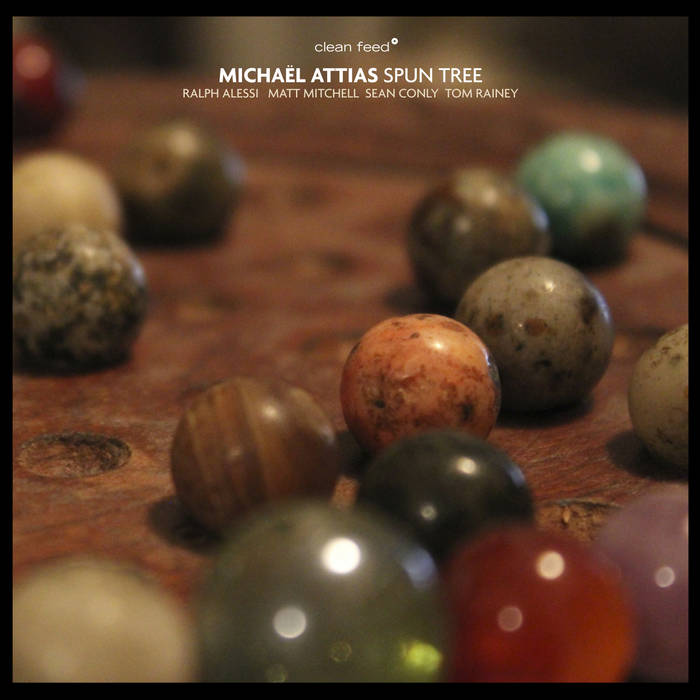 There is almost always something unexpected in the music of Michaël Attias, a reluctance to repeat, to conform to type, as if once we have heard something in his music we will never quite be privileged to hear it again. That trait may be central to the music of Spun Tree in which his art seems to consist in the precise delineation of kinds of uncertainty, whether perceptual, psychological or mathematical (“Are you sure Heisenberg said that?”)

It is work that seems to chart the anxieties of the early 21st century which if not new are experienced afresh—like the very idea of producing acoustic music for a digital maze. To this end certain theatrical constructions—the military parade, the vaudeville skit—here seem both to insist upon their own importance and to celebrate their premature dissolution, from the opening “Bad Lucid” (negative clarity) deconstructing itself and “Question Eight” explicitly interrogating the eighth note to the slightly dissonant fanfare of “Spun Tree” itself, suspended between kinds of declaration and doubt (“Why that’s a spider tree,” he insisted. “No, no,” she thought, “it’s a cotton-candy shrub.”) Ultimately each position has a fundamental rightness, the work becoming a celebration of its own sense of difference.

. This is very much the music of a band that is bringing a composer/performer’s ideas into being, including the idea that that realization is shaped and re-shaped in their participation. Given the importance of each part, the music seems rooted in the relationship between the trumpet and the alto saxophone, one so rich that Attias foregoes the depth and force of his baritone saxophone for the sake of this relationship. The similarity in the instruments’ ranges makes all those subtle expressive deviations in pitch that much more pronounced, including the way the instruments seem to move in and out of identity.

What is most beautiful in this is the disregarded history of trumpet/saxophone frontlines marked by a too-easy contrast of laconic and even tongue-tied trumpeters and verbose saxophonists. Attias and Ralph Alessi clearly choose to be almost perfectly matched, as if there is an agreement in which the rate and range of notes is arrived at telepathically and quietly respected, as if to violate the trust would result in a finely balanced thing tipping over. There are moments, for instance, in the concluding dialogues of “Calendar Song” when the alto saxophone seems almost to turn into a second trumpet.

This ambiguity initially feeds an impulse to the moody and stark, with slightly attenuated pitches that develop a concentrated brilliance. In turn It stimulates a particular expressive looseness in the rest of the band. The recently arrived musicians like Matt Mitchell and Sean Conly find confidence in their enthusiasm, the veteran Rainey enthusiasm in his confidence. The harmonic character of the music is so tightly conceived that it is often the pianist who must break free.

There is another intriguing shift in the conventions here, improvisation frequently preceding theme statements—the shofar-like trumpet that introduces “A Calendar Song” here, as other instruments do elsewhere, suggesting that the complexity of the compositions is rewarded in the degree to which the musicians are allowed to contextualize them. “The Calendar Song” seems insistently about time—the particular lock-step of drum and piano the press of time versus that opening trumpet’s insinuation of mystical timelessness.

How might one better describe “Subway Fish Knit” than the name it’s already been given or that state it chooses to sketch in sound, the way the underground is ultimately an invitation to the aqueous, where it matters not if the knitting is voluntary, intentional or somehow otherwise—it is a theme that is always both catching up and waiting for itself and yet Attias’s band—the few but carefully chosen—stare at the slightly fishy skein with the acceptance of zen masters and the open-ended enthusiasm of gourmands. It is in that particular point where the threads come together for a knot that the lines conspire to create the particular wave of Attias’s lower register multiphonic. That particular tone once articulated, the end cannot—hear the speed of the final theme—come fast enough.

“Arc-en-Ciel” is the most straight-forward piece here, a piece of singular beauty that is polished just enough to reveal the microtonal gaps in the overtone patterns of trumpet and alto, that slight airy burr which is not just the alto’s sonic signature but a jointly arrived at friction, an airy beat pattern. It is almost entirely theme, but it inscribes the luminous arc that is traced in this music, that collective wisdom that moves the music from doubt to joy.

“Ghost Practice,” too, exploits the remarkable arrival of Matt Mitchell who improvises at length before the arrival of the theme, a certain martial message in which the drum pattern (Rainey would work well both in parade and vaudeville) and horns engage in a certain internal debate as to whether the final destination is a circus or a war....the patterned coming-apart (a freely improvised duet of piano and trumpet) suggests disorder is the better part of valor.. Other modes of conflict will emerge as well—like the later debate about tonality waged by piano and alto or Alessi’s own controlled use of timbres, a Bronx cheer ennobled to Brooklyn multiphonic.

These notes, of course, are only subjective jottings—switch perspective to the team of Conly and Rainey or the integrative role of Matt Mitchell and the music’s patterns shift--but they point to the high thread count of Attias’s compositions as the quintet realizes them, a specific yet dense weave in which you might find things known and unknown, private and shared, things thought guarded or simply unthought, parties gone by and to come, that deserve to be taken out and looked at in the particular light of the quintet’s dusk-timed ambiguities.

Thanks to Ralph, Matt, Sean and Tom for their genius and generosity; to brothers-in-renku John Hébert and Satoshi Takeishi, Russ Lossing, Ben Gerstein, Tony Malaby, Nasheet Waits, Eric McPherson; to Alain Kirili & Ariane L-H., Robert Rumbolz, Pat Moriarty and Ellen Lease; Carine Attias, Jean and Aimée Attias; Robert Woodruff; Macdowell Arts Colony; thank you to Louisa for her light and love and ears. Special thanks to Pedro Costa – this is our fourth album together – for believing in this music and acting on it.